YOURS & OWLS ALL AGES FESTIVAL SIDESHOW 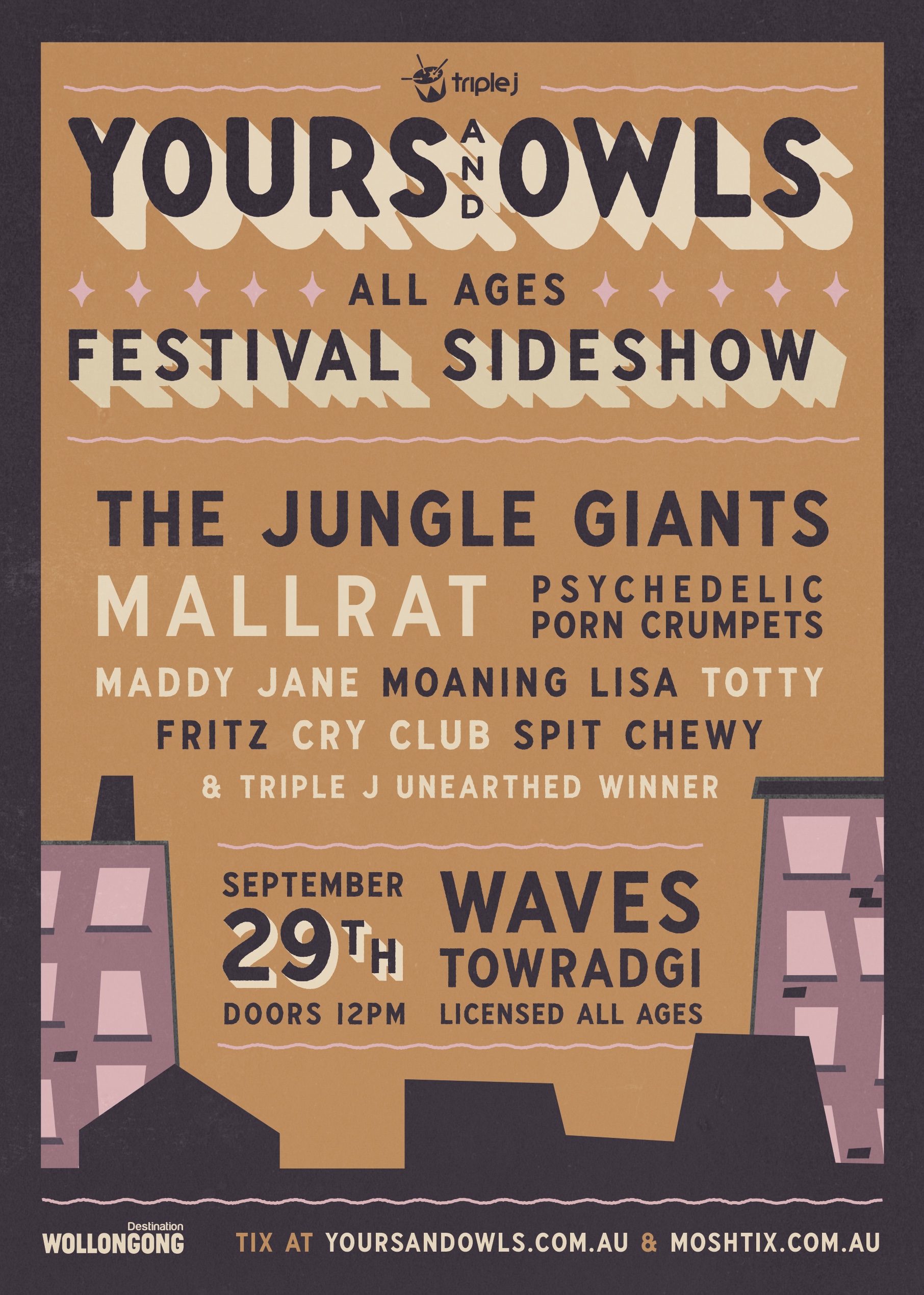 One for the kids! Yours & Owls Festival ALL AGES Sideshow will hit Waves at Towradgi on September 29, welcoming music-lovers of all ages. This year’s all ages festival line-up does not disappoint, with big names and emerging Australian artists ready to make their mark on the Gong!

The Jungle Giants returned in 2017 with the highly anticipated follow up album to Speakerzoid and one thing became very clear: they have found their sound. Quiet Ferocity, featuring hit singles ‘Feel The Way I Do’, ‘Used To Be In Love‘ and ‘Bad Dream’, catapulted across the airwaves and earned them a triple j feature album, as well as four nominations from the public in the coveted triple j’s Hottest 100. Quietly and diligently The Jungle Giants have become one of Australia’s best pop bands, playing to packed out rooms and festivals all around Australia, these guys know how to put the ‘festive’ in festival.

The “Hannah Montana of the rap game” aka Mallrat will be making her way to Yours & Owls this year for her debut performance at the festival. Whether it’s her music, her effervescent stage shows, her bold and striking fashion choices, or her seriously witty and funny online presence (with strong cameos from her dog/co-star on the rise Charlie), it’s all combined to amass a huge audience from Melbourne to Mexico City. Her debut EP Uninvited would go on to fetch millions of streams and launch her career. With stand out tracks ‘Uninvited,‘ and the dreamy jam ‘For Real’ – saw her stocks seriously take off.

Releasing her debut EP Not Human At All earlier this year, talented young artist Maddy Jane is writing songs far beyond her years on a beat up guitar her mum gave her in high school. It’s been a massive 12 months for Maddy with break out singles ‘Thank You and Sorry’, ‘No Other Way’ and ‘Drown It Out’ getting high rotation on triple j. Plus, a string of supports around Australia, top it all off Maddy was chosen to support superstar Harry Styles Australia / New Zealand tour. Be sure to catch this budding superstar in the flesh at Yours & Owls.

Canberra-based music grads Moaning Lisa, is the product of four women finding purpose in making loud noises together. Their music operates on the edge of the grunge genre: somewhere between composed restraint and fuzzed-out, life-affirming alternative rock. ‘Carrie (I Want A Girl)‘ has been smashed on the radio and is a taste of their second EP due later this year. Creating an atmosphere entirely of their own, during their raucous live shows has seen them consistently pack out venues across the country.

Three-piece rock band from Wollongong, TOTTY, spent their early years writing and recording music out of their own shed. Since those days, TOTTY have burst onto the Australian music scene with debut single ‘RIFF‘ and follow up singles ‘SIGH’ and ‘Uncomfortable‘. TOTTY have moved on from their humble beginnings to share their music with the masses, touring festivals such as Sounds of the Suburbs, and supporting the likes of Ruby Fields and Skegss on sold out tours across the country.

Newcastle’s 18-year-old Tilly Murphy aka FRITZ is a self-proclaimed creator of ‘space cadet noise-pop’. She quietly announced her self-titled debut album last year, landing herself Independent Artist of the Week at Fbi Radio. Only a few days later her single ‘Yuk!’ was picked up by Dom Alessio at triple j, and the Tilly train took off. Welcoming in the full band, things have not slowed down since.

Cry Club is a 2-piece post-punk/pop band straight out of Wollongong. A collaboration between Heather Riley and Jonathon Tooke, the project aims to combine the worlds of shoegaze and post punk with pop melodies, taking equal inspiration from bands such as McClusky and Unwound, to artists like Bec Sandridge and Eilish Gilligan.

Yours & Owls All Ages Festival Sideshow is Licensed AA.

Minors (12 years or older) must be accompanied by a parent or responsible guardian. (A legal guardian is defined as a person over the age of 25)