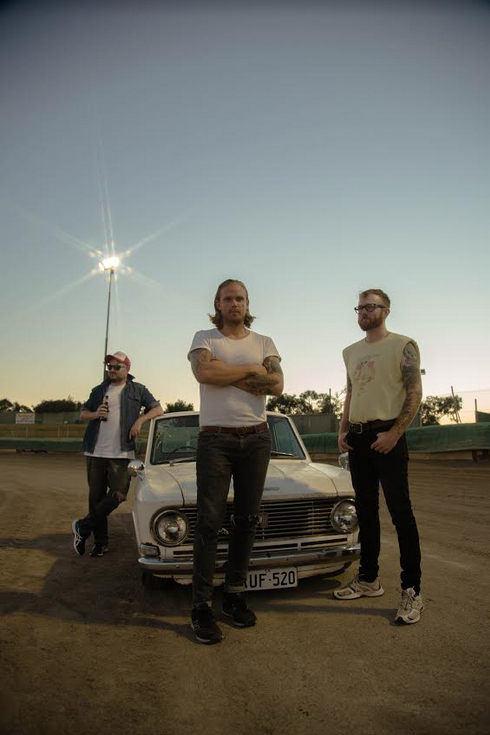 Everybody knows that GRENADIERS are the real deal. The Adelaide rock warriors have returned, with acerbic new single ‘Suburban Life’ and a high volume east coast tour.

‘Suburban Life’ is a driving justification of why Australian rock music is firmly back on the up and up. Drawn from some new recordings you’ll hear more of soon, everything about it is BIG. Driving guitars, relentless pace, that shout-along refrain. Frontman Jesse Coulter’s whiskey and smokes growl is more incisive than ever. Suburban Life rolls on, tongue firmly in cheek…

For over seven years, Grenadiers punk/rock straddling fury has seen them rise above the tangle of middle-of-the-road domestic rock. The trio emerged victorious to claim triple j feature album status for their acclaimed 2nd LP ‘Summer’ last year, touring nationally with punk legends Millencolin and Shihad and decamping to the UK to dominate at The Great Escape. Happy Mag listed Jesse in their ’20 Aussie Singers You Need in Your Life’ piece. Rad.

Individually, Jesse, Phil and Jimmy are rooted deep within the history and mythology of rock, punk and hardcore. This common fanatical adoration is the foundation-stone of their relationship. Combined, they become a fearsome, relentless beast that sounds like its feasted on the souls of Queens of the Stone Age, The Bronx and Bad Religion, at midnight in an abandoned desert truck stop. With these awesome powers they write songs that dissect the absurdity of the everyday. And that is refreshing as hell.

Always eager to abandon the well-beaten touring path, Grenadiers have plied their rock wares in such unconventional locations as Griffith, Dunsborough and Arnhem Land. They’re as comfortable in a far-flung RSL as in a dive bar or on a festival stage. See for yourselves what they’ve learned about delivering an all ruckus, no rubbish rock show when they take ‘Suburban Life’ down the east coast throughout May.

Come, witness the mighty Grenadiers worship expertly at the alter of rock.