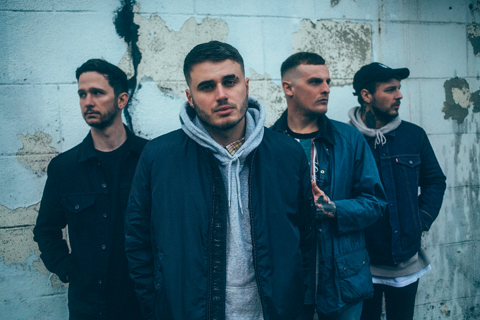 Bursting on to the scene in 2012, Canterbury quartet Moose Blood solidified themselves as one of the UK’s hottest exports. With an absolutely exceptional clutch of new songs under their belt, Moose Blood are thrilled to announce their eagerly-awaited return to Australia touring nationally in August/September with special guests, Southern Californian post-hardcore, emo four-piece, Movements.

In an era where a majority of musicians seem to view writing good songs as low down the list of attributes required for a successful career, Moose Blood are that rarest of things: a band who let the songs do the talking.

2016’s ‘Blush’ took the best of American mid-west emo and updated it with a quintessentially British twist, proved to be a breakout success, crashing the UK top 10 and propelling the band on to the main stages of Reading and Leeds Festival and Lollapalooza as well sold out shows at L.A’s legendary Troubadour, New York’s Bowery Ballroom and London’s KOKO – to say nothing of the Kerrang! and Alternative Press Music Awards nominations they’ve picked up on the way.

Their 2018 release ‘I Don’t Think I Can Do This Anymore’ (out now via Hopeless Records) was recorded in Los Angeles with long-time collaborator Beau Burchell. It’s an LP which delves into the most complexly emotional territory they’ve ever explored.

Music and emotion share a timeless physiological, psychological, and spiritual bond. A chord, a melody, or a lyric can lift spirits and inspire. Movements achieve that sort of reaction on their full-length debut, Feel Something (out via Fearless Records). That musical empathy quietly launched Movements on an upward trajectory in 2015.

Formed by longtime friends, the group landed a deal with Fearless Records after just one local gig. Acclaimed by the likes of Alternative Press and New Noise Magazine, songs like “Nineteen” and “Kept” each respectively amassed over 800K Spotify streams and counting as they have toured nonstop. Ultimately, Movements bring emotion to life in each note.

Taking in the biggest venues Moose Blood have ever tackled, the four-piece look set to be helping a lot more fans, old and new so get along to one of the shows.