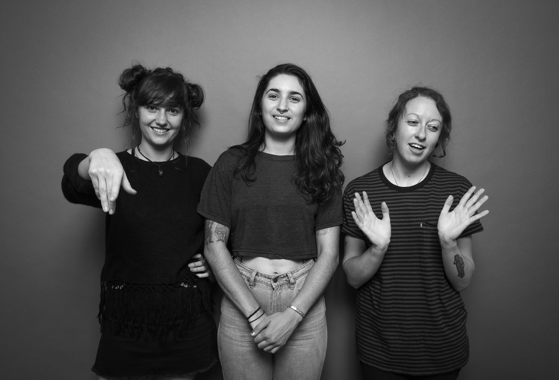 Following two dazzling sold out shows at Sydney Opera House as part of Vivid LIVE, and before they leave on a jet plane to play their first international shows, Melbourne indie-punkers CAMP COPE are stoked to announce a handful of headline club shows supported by New York’s WORRIERS around Weekender Fest this September. Camp Cope and Worriers will also be touring the US together next month.

It’s easy to say that there is something special about watching three punks from Melbourne walk off stage after their second sold out show of the night, to a rapturous standing ovation at Sydney Opera House. What makes it even more special, is watching it happened a little over a year after they were playing to 100 people in pubs around Melbourne.

Over the past 15 months Camp Cope have become a force in modern music, a wholly independent band who will only do things on their terms, and never compromising on their values. The ongoing impact they have on their fans is evident, from the overwhelming support seen on the ground, to the current online whispers about a new, unrecorded song they have been playing live: a song which tackles how women are treated in the music scene head on. A song which had audience members at Vivid LIVE and their recent shows with Against Me! yelling cheers of agreement at the end of each lyric line sung.

it’s another man telling us to book a smaller venue.”

Camp Cope are heading to the U.S. of A next month to play their first international shows as a full band. Georgia Maq played a handful of shows solo in the US late last year, including a date at Fest in Gainesville, Florida, last October which had a library full of people singing along to every word.  They will be touring down the East Coast with Cayetana, who toured with Camp Cope in Australia last year, and down the West Coast with Worriers.

Worriers are a Brooklyn-based melodic punk band whose music is centred around the song writing of singer Lauren Denitzio. Following a splattering of EPs between 2011 and 2014, Worriers released their debut album Imaginary Life in 2015 which was produced by Laura-Jane Grace of Against Me! to critical acclaim, with NPR stating “Denitzio and crew manage to turn ambivalence into an asset… an admission of fear transmuted into a battle flag.” and Consequence of Sound saying it’s “a snappy, lean record that hones in on the space where the personal falls under the shadow of the political.“ Lauren Denitzio recently supported Julian Baker across her headline shows in Europe.